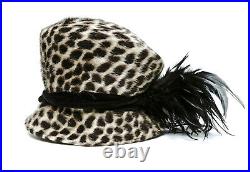 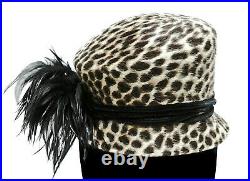 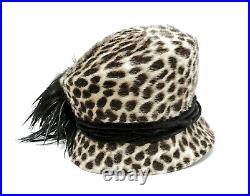 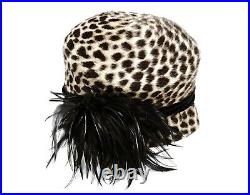 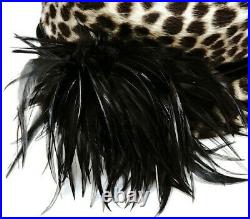 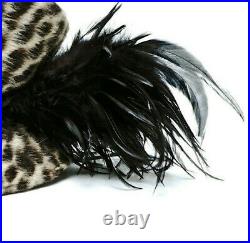 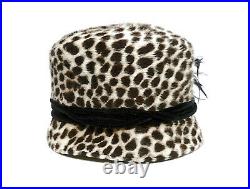 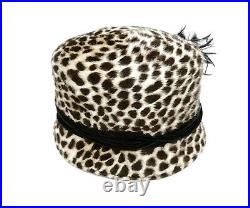 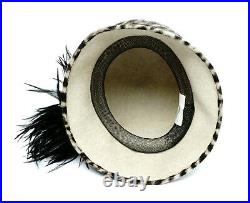 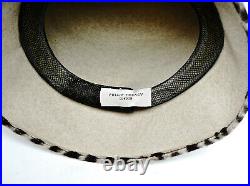 Philip Treacy London Cheetah Print Faux Fur Asymetrical Cloche Hat with Black Feathers. Women’s Size 7 Medium. Philip Treacy Faux Fur cloche hat with cheetah print throughout, black feather grouping decoration and velvet hat band around crown. Netting inside of brim for comfortable fit. Size 7 based on measurement. This style is called a cloche or in today’s vernacular a “bucket hat”. Created in 1908 by French Milliner Caroline Reboux, the Cloche hat quickly became one of the most popular styles of hat in the world. It reached its peak popularity in the 1920s, seen worn on many women and found in many ateliers. The hat has a rounded crown with a very short peak similar to the shape of a bell. The hat gets its name from the French word for “bell” named after its bell-like shape. The hats were typically made from a soft felt which shaped to the wearer’s head giving a close-fit silhouette. Today they are seen made from a variety of different materials including faux fur. Philip Anthony Treacy OBE is an Irish award-winning haute couture milliner, or hat designer, who has been mostly based in London for his career, and who was described by Vogue magazine as “perhaps the greatest living milliner”. Treacy has designed hats for films, including the Harry Potter film series, and most notably the Beauxbatons hat for Harry Potter and the Goblet of Fire in 2005. Sarah Jessica Parker has worn his hats at Sex and the City premieres (2008, 2011), and Met Galas (2013, 2015). Treacy designed Madonna’s gold headpiece for her 2012 Super Bowl XLVI halftime show. Lady Gaga described Treacy as “the greatest milliner of all time”, while hosting his 2012 London Week fashion show. Notable designs for Lady Gaga include a telephone-shaped headpiece with a removable handset hat, worn for her appearance on Friday Night with Jonathan Ross in 2010 (now in permanent display at Madame Tussauds), and a lightning-bolt hat she wore for the 52nd Annual Grammy Awards. As well as Isabella Blow, Sarah Jessica Parker, and Lady Gaga, other notable muses for Treacy’s hats are socialite Daphne Guinness, model Naomi Campbell, and singer, and model, Grace Jones, who used Treacy as art director and designer for her 2009 The Hurricane Tour. Circumference: 22 inches, Size 7. Brim Width: 2 inches. Crown Height: 2 to 4 inches. This item is in the category “Clothing, Shoes & Accessories\Specialty\Vintage\Vintage Accessories\Women’s Hats”. The seller is “encoreboutiqueaz” and is located in this country: US. This item can be shipped to United States.