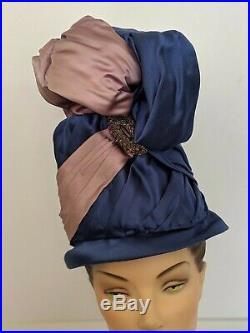 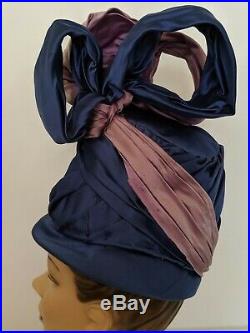 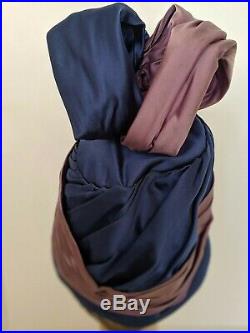 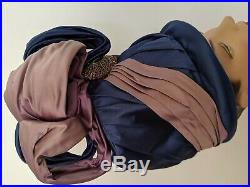 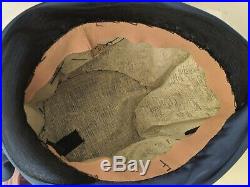 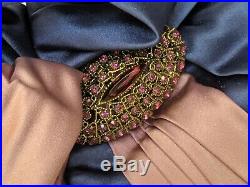 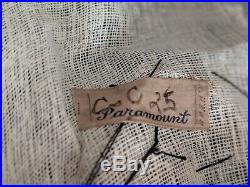 This one of a kind hat looks like it was made in-house by Paramount designers for a specific part. Feels like it is made of rayon or silk featuring four wire framed loops at the top of the hat and a big jewel on the front. It is in excellent condition with the exception of a couple small snags on one side of the purple ribbon. It has a Paramount label sewn into it with the letters “C&C 25″ written on it. Based off label and style best guess is that is from the the 1950’s. Hat would make an fabulous display piece. Would probably fit around a size 7. CHECK OUT MY OTHER PARAMOUNT HAT LISTINGS! About ten years ago Paramount Studios decided to liquidate a great deal of their wardrobe department. We acquired as much as we could. Some had actresses names sewn in them, others we were able to identify from watching Paramount films, but they were all unique and special because of their heritage. You can see pics of some of the items we discovered below. These hats are amazing, most in very good condition and date from the 1910s to the 1950s (possibly older). These hats have all the style and high fashion you would expect from vintage Hollywood. They aren’t just film noir style hats, they were probably actually used in a film noir movie. Some are famous Hollywood designer created hats with their labels, others could have been made in-house by Paramount designers. We have not been able to identify who wore any of these particular hats, a few have names in them, but maybe you will be able to match them from your own research. Keep in mind, studios only supplied wardrobe to principle players, others had to bring their own clothes. We do also know that they would often re-use wardrobe in multiple films as we have found pieces worn by different actresses in different movies. Right now we are just listing a limited number, but if they are popular we might list more. CHECK OUT MY OTHER LISTINGS. About the Paramount stamp/markings. Paramount Pictures Hollywood, U. Gold/blue stamp, one of the originals found on older items. Property of Paramount Pictures Corp. Ladies Wardrobe – gold/blue stamp, one of the originals found on older items. Sewn Paramount label – was used more often in wardrobe than hats. PARAMOUNT – a stamp that seems to appear more in the 50s and on, an older item could still have this stamp if it was restamped. PAR – handwritten in black ink. BB – handwritten in black ink (not sure of significance). The item “PARAMOUNT STUDIOS Vtg Turban Hat Costume Blue Purple Rhinestone Hollywood 50s” is in sale since Wednesday, October 16, 2019. This item is in the category “Clothing, Shoes & Accessories\Specialty\Vintage\Vintage Accessories\Women’s Hats”. The seller is “the-starmaker” and is located in Las Vegas, Nevada. This item can be shipped worldwide.