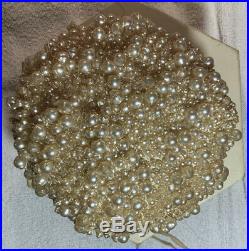 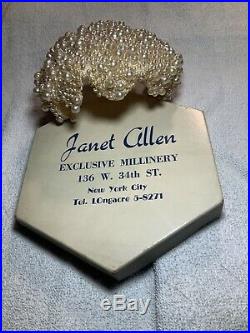 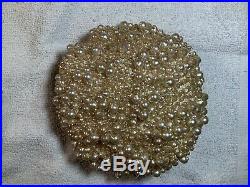 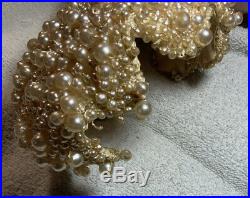 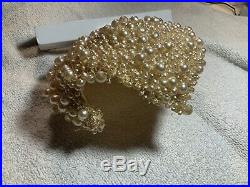 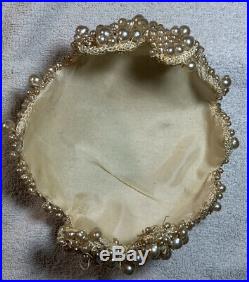 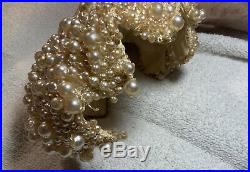 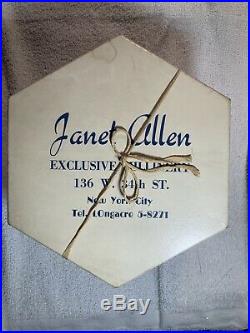 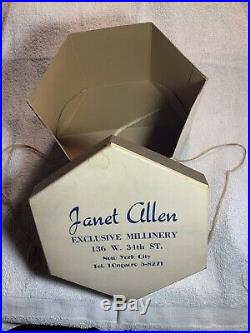 BREATH-TAKING VINTAGE EXAMPLE OF 1930s ART DECO. “PEARL” PILLBOX WOMEN’S HAT #1. With HUNDREDS OF SEWN IN VARIOUS SIZE NATURAL APPEARING PEARLS. PERFECT FOR A BRIDE in PINK/WHITE COLOR – Size 22 (22 ROUND). INVISIBLE BUILT IN HEAD HOLDS ON THE FRONT, SIDES AND REAR. MEASUREMENTS: THREE FRONT 1″ – TWO SIDE 1 1/2″- ONE REAR 2. ESTATE SALE: Single New York Owner. EIGHT FASHIONABLE 1920s – 1950s HAT COLLECTION: HAT #1 The most amazing of the eight hats!!! IMPORTANT NOTE: THIS HAT COMES WITH ITS ORIGINAL 1930s “Janet Allen” HAT BOX. Beginning in the 1930s the basic pillbox design was employed by milliners, or hatmakers, who created a new style of head covering: the pillbox hat, a smallish, brimless round hat that featured straight sides and a level top. Pillbox hats were popular because of their simplicity and elegance. They most often came in solid colors and were usually unadorned with accessories except for a colored net veil, or a single pin or jewel. They were, however, made of an array of materials, some of which were elaborately designed. These included green wool with ornate gold cording; black velvet, smothered in black beads; and white organdy, a transparent fabric, with attached overlapping organdy petals and silk rose bouquets. Pillbox hats might also be made out of the furs of mink, lynx, fox, or leopard skin. The popularity of the pillbox hat increased during the postWorld War II (193945) era and reached its peak at the 1961 inauguration of President John F. Kennedy (19171963), when his wife, Jacqueline Kennedy (19291994), wore a simple, unadorned bone wool pillbox hat designed by Halston (19321990). She even was wearing a pink one on November 22, 1963, as she cradled her husband in her arms moments after he was shot while riding in a Dallas, Texas, motorcade. A STUNNING EXAMPLE OF THE 1930s “PILLBOX” HAT COVERED WITH A VARIETY OF SIZES FOR THE PINK/WHITE BEADS, FITTED FOR A WOMAN TO WEAR AT DIRECTLY ON TOP OF HER HAIR, WITH BUILT IN CLIPS THAT EXTEND FROM 8 1/2″ – 13″ TO HOLD THE HAT IN PLACE IN ITS 22 CIRCUMFERENCE. THIS IS A GREAT EXAMPLE OF WHY DURING THE EARLY TWENTIETH CENTURY, THE POPULARITY AND INFLUENCE OF ART DECO WAS AT ITS PEAK, AND EXTREMELY UNIQUE HATS WERE MADE. In 2007, the mother of a fellow police officer I cared for until his duty-related death, also passed away and I had to fly to New York to identify the body. Betty had lived in Flushing but continued to work until her 80th birthday. We had become friends, and she told me about the 1920’s & 1930s when she had bought these unique piece that remind me of Angelina Jolie’s attire in “The Changeling” which was also, coincidentally, about the LAPD. I retained a company that was supposed to sell the furnishing of the family house that she maintained after her sister, Marie, passed away. Her work was in New York City, so she lived in a “flat” – her’s was a condo, but later residents lived in them as apartments – and she needed to be close to work. The company wasn’t even willing to donate the clothing to charity, so I offered a giant closet of clothing to any resident of the buildings. But I was fascinated about the “Flapper Era” around the time she bought THIS EIGHT HAT COLLECTION, so I carefully brought them back with me to Los Angeles. The Wall – Las Memorias Project. A health and wellness organization dedicated to serving ALL Latinos and Latino communities, as well as LGBT Latinos and other underserved populations, through advocacy, education, family support, financing and other food-shelter-medical needs, and certified internships open to all people as well as college/university students that will likely go on to be the next generation of leadership for all communities. ORIGINAL “JANET ALLEN EXCLUSIVE MILLINERY” 136 W. New York City Tel. Single owner kept the hat inside the hatbox with the hat box ribbon tied. Due to the virus, with the decreased filming, I thought that these unique treasured and maintained pieces would be a good time to put them to proper use for fashion designers and stylists from TV and films. I have no idea what the hats are worth, but at least they will be put to good use, particularly this one and a white pearl design one, which are more “formal” and could be used instead of having to make faux 1920s and 1930’s ones. Each hat has its own personality, but I recognize them, perhaps wrongly as being “Cloche, ” “Flapper, ” and “Skull Cap” hats. (such as putting it out front or dropping it off). Hat is bubble wrapped and the hat box is bubble wrapped and put in a larger box filled with bubble and other material to TOTALLY INSULATE and protect the hat. This hat is guaranteed to be undamaged and as pictured and described. Upon inspection for damage. Please contact me if you have any questions about the item. The item “BREATH-TAKING VINTAGE 1930s PEARL PILLBOX WOMEN’S HAT Size 22 (22 ROUND)” is in sale since Thursday, September 10, 2020. This item is in the category “Clothing, Shoes & Accessories\Specialty\Vintage\Vintage Accessories\Women’s Hats”. The seller is “sgtmitchgg” and is located in West Hollywood, California. This item can be shipped to United States, Canada, United Kingdom, Denmark, Romania, Slovakia, Bulgaria, Czech republic, Finland, Hungary, Latvia, Lithuania, Malta, Estonia, Australia, Greece, Portugal, Cyprus, Slovenia, Japan, China, Sweden, South Korea, Indonesia, Taiwan, South africa, Thailand, Belgium, France, Hong Kong, Ireland, Netherlands, Poland, Spain, Italy, Germany, Austria, Bahamas, Israel, Mexico, New Zealand, Philippines, Singapore, Switzerland, Norway, Saudi arabia, United arab emirates, Qatar, Kuwait, Bahrain, Croatia, Malaysia, Brazil, Chile, Colombia, Costa rica, Dominican republic, Panama, Trinidad and tobago, Guatemala, El salvador, Honduras, Jamaica, Antigua and barbuda, Aruba, Belize, Dominica, Grenada, Saint kitts and nevis, Saint lucia, Montserrat, Turks and caicos islands, Barbados, Bangladesh, Bermuda, Brunei darussalam, Bolivia, Ecuador, Egypt, French guiana, Guernsey, Gibraltar, Guadeloupe, Iceland, Jersey, Jordan, Cambodia, Cayman islands, Liechtenstein, Sri lanka, Luxembourg, Monaco, Macao, Martinique, Maldives, Nicaragua, Oman, Peru, Pakistan, Paraguay, Reunion, Viet nam, Uruguay, Russian federation.